* In case of any delay in receiving the OTP, you may verify it later. Please proceed without verification.

Enter your City name or Pincode

No matter what is the status of the international-level politics, Tirur in Malappuram has its undefined ties with the neighboring country Pakistan. This has been going on for a century now as the Kerala betel leaf is a favorite among the Pakistanis. 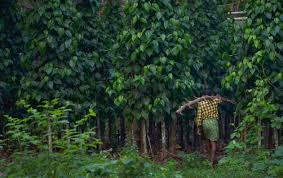 After Independence of India, when the Urdu-speaking Muslims moved in to Tirur from various places, the potential for growing quality betel leaf was identified. Ever since the betel industry has flourished in this area. It is a well known fact that the Tirur Paan Bazaar does not sleep all night. Farmers work till late night to sort out and pack the betel leaves in the best possible manner. For this purpose only skilled labour is employed and they work until the midnight or till the time the job gets finished. Then these packed baskets are sent from Karipur International airport by early morning flight.

The betel leaf in Malabar is grown in Vylathur, Edarikode, Ponmala, Arikode, Tanur and Tirur areas of the district of Malappuram. There are almost 100 traders in the region who are engaged in this trade. Out of the 2000-2500 baskets of paan, majority are exported to Pakistan. The ones that are not exported are sent to states like Uttar Pradesh, Madhya Pradesh and Rajasthan in India. The domestic paan lovers chew Pathi, Kanni and rough Pathi which are produced here.

Although the farmers from other regions of Kerala have tried their best to grow the Malabar betel leaf in their respective regions, but they have not been successful in doing so. This makes it a specialty associated with the Malappuram district only. Farmers and scientists from different parts of the state combined their skills and knowledge but it does not grow in Kannur even, although it is a neighbouring city. The reason stated for the same is that the wind and soil in Tirur are best suited for the betel leaves.

It is no less than an art to pack the betel leaves so that they can remain fresh for sometime. A bunch of 100 leaves is made by the farmers and this bunch is arranged in a bamboo basket which is covered with dampened hay so as to keep them fresh. They are grown by mostly landless farmers who rent the land for the betel leaf cultivation.

Most of the traders send these leaves twice in a week, mostly on Thursday and Monday to Mumbai and Delhi by train. Apart from these traders, there are many farmers who send their baskets via air to Mumbai from where they are transported to Lahore. These leaves are known by the name of Tirur Lanka Paan and are of great demand due to its distinct flavor in the cities of Pakistan.

Traders of Betel Leaves in Tirur